Jade Picon at BBB22: The influencer and businesswoman stands out with her looks that range from expensive brands to shorts bought at Brás, in SP. See how much it costs her looks here.

Jade Picon’s looks are making waves at “BBB22”. The influencer wears very expensive designer clothes, but also mixes it with more popular pieces. We are going to show you 10 pieces that have attracted attention so far in the program, from the most expensive to the cheapest.

One of the most commented looks was the production with colored bodysuit and black shorts used in the Discordia Game. The leather item could even pass as a basic, but it is worth millions, or rather, R$ 12 thousand, and is from the Saint Laurent brand.

Another piece that is at the top of the most expensive ranking was the neon boot worn a week earlier, also in a Game of Discord. The piece that shone in the BBB room is from the American brand Neon Cowboys and the value in reais reaches R$ 2 thousand.

Jade chose a light blue and yellow jumpsuit to enter “BBB22”, by London-based brand Poster Girl. The outfit costs 175 pounds, which is equivalent to around R$1,200.
Poster Girl is a super cool brand and is one of the darlings of Bruna Marquezine, Dua Lipa and Kylie Jenner.

At the party led by Douglas Silva, Jade wore an oversized tank top with transparency and sparkles. Despite having many foreign items, especially from the United Kingdom.

A look worthy of leader of the week. This is how Jade “debuted” the room she will sleep in for the next few days. The comfy water green outfit had already been used days before in the garden.
The pieces are from the British brand The Ragged Priest and cost, in total, about R$ 828.

Jade’s first fashion fuss on reality was the crochet bikini and the purple bucket hat. She wore it in the early days and quickly similar pieces ended up on street vendors.
The bikini is from the  brand Feline, which has already partnered with Preta Gil and Carolina Dieckmann, and costs R$379, while the hat can be purchased for R$320. 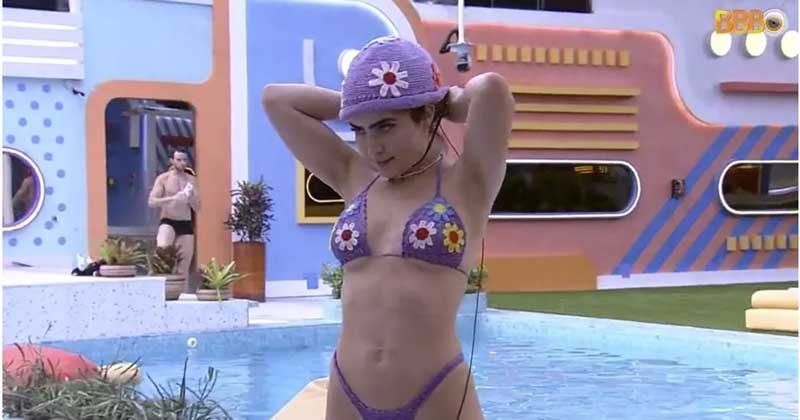 Another brand that Dua Lipa has been seen using is O-Mighty. The “Don’t Start Now” singer even has the same piece that Jade Picon wore at leader Thiago Abravanel’s party. The blue checkered romper costs about R$400. To complete the look, the influencer wore a white skirt.

The influencer was among the most voted by the house, but managed to save herself in the back and forth test.
The dress of around R$380 is from the brand Jaded London. Another London brand in the influencer’s wardrobe. Beyoncé and Taylor Swift have already worn clothes from the brand, which shows how the influencer and the team are attuned.

9 – The bodysuit that sold out in minutes

Despite the black shorts costing BRL 12,000, the tie-dye bodysuit is by Shein in partnership with Filipino stylist Pamela Madlangbayan and cost BRL 55. The piece sold out in minutes.

Jade is also a youtuber and posted a video on her channel in which she leaves with R$100 to assemble looks in the popular shopping district in São Paulo. It was there that she bought, for R$35, the shorts she wore with her purple bikini.